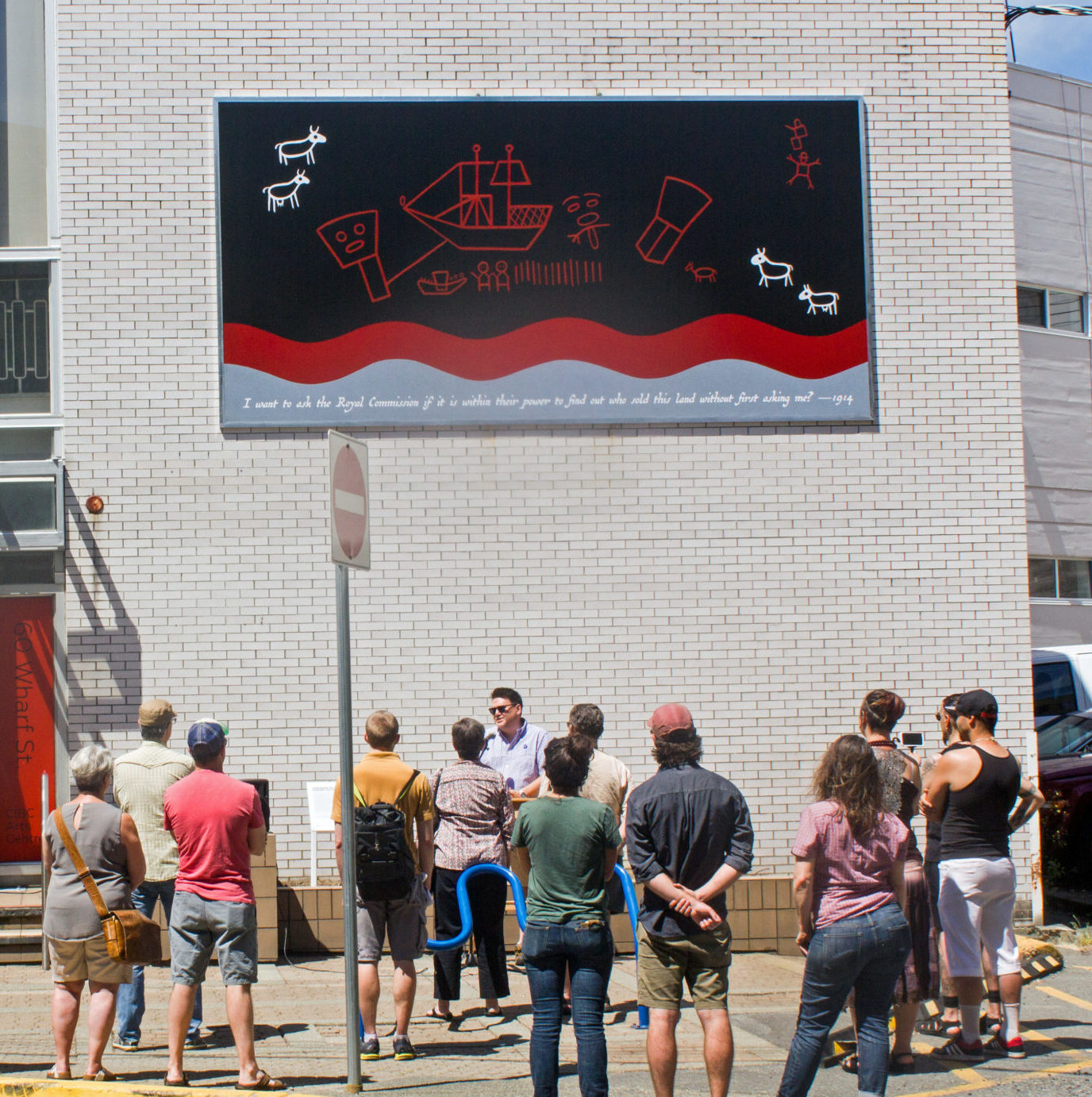 This artwork depicts early 20th century pictographs from the mouth of the Kingcome Inlet, near artist Marianne Nicolson’s ancestral village of Gwa’yi. These images, originally painted on a cliff face near the edge of the water, show the influx of settlement and resource exploitation on Dzawada̱’enux̱w territory.

Inquiry to the Newcomers is installed on the side of Nanaimo Art Gallery that faces Wharf Street, which ran along a tidal inlet until 1964, when it was filled in for industrial and commercial uses. Many of Nicolson’s works refer to the ocean and the rivers of her home, where marine life serves as a gauge for the health of the place and the community. These concerns are also highly relevant in Nanaimo, a Harbour City that relies on the resources of the Salish Sea, located on the territory of the Snuneymuxw First Nation. Nicolson chose this location for her artwork in order to parallel these two sites and histories, linking early 20th century appropriation of Indigenous lands to the ongoing and widespread exploitation of land and water resources. Nicolson’s work celebrates the re-emergence of Indigenous voices, while articulating that there can be no true reconciliation between Indigenous and settler societies without an acknowledgement of Indigenous peoples’ displacement from their lands.

This artwork was commissioned by Nanaimo Art Gallery as part of celebrations to mark our 40th year. In 2017, through exhibitions and programs, we explored the question: What does it mean to live on an Island?

In 2018 the gallery acquired Inquiry to the Newcomers for our permanent collection so that it can be experienced by Nanaimo residents and visitors for years to come.

The original production of this public artwork was made possible by the Community Fund for Canada’s 150th, a collaboration between Nanaimo Foundation, the Government of Canada, and extraordinary leaders from coast to coast.

The Dzawada̱’enux̱w People have lived within their ancient lands in Kingcome Inlet for thousands of years. In 1792 two British ships and two Spanish ships explored the channels of Musgamakw Dzawada̱’enux̱w territories. The traders were met by our people who exchanged fish and furs for great coats and other articles. The pictographs depicted in this artwork were painted at the mouth of the Kingcome River which was renamed after John Kingcome, a rear admiral in the Royal Navy. They depict an early encounter as perceived from a Dzawada̱’enux̱w perspective.

The ship is anchored to a copper (t’lakwa) and a canoe floats below it. Dash marks indicate a form of accounting. Another copper is depicted to the left, and below it a small animal. Between the ship and the copper is a haunting face that may have existed prior to the ship pictograph. High above the copper is the small image of a man with what may be a broken copper above his head.

Over the years, a growing series of tags left by industrial workers has infringed upon and overwritten the ship pictograph. In a similar manner, between 1876 and 1916 government reserve commissions accomplished the task of dispossessing Indigenous nations from their lands. By establishing the reserve system, non-reserve lands were opened up for settlement.

In Kingcome, Indian Reserve #7 was established for the Dzawada̱’enux̱w. It covered their village site of Ukwanalis and little more. The lands below the village were then granted as “free land” to settler farmers. In 1921 during the height of the potlatch persecutions conducted by the Indian Agent, William Halliday, my great uncles conducted ceremonies where they purchased cows from his brother, settler farmer Reg Halliday, and then held a feast (an illegal act according to Canadian Law). They then had a pictograph depicting copers and cows painted at the mouth of the inlet along with an image of the boat which had transported the cows.

In my artwork, I have added the cows in white. They act both as a marker of incursion on Indigenous jurisdiction as well as Indigenous resistance. In this version, the ship pictograph, which is representative of Indigenous perspective, has been emancipated from the tagging that obfuscates it. A quote from the 1914 McKenna-McBride Royal Commission expresses the consternation of Kwakwaka’wakw chiefs that their lands have been sold without their knowledge or consultation. Even today this fundamental question remains unanswered and haunts the legal status of the Province of British Columbia.

In this location, the banner acknowledges the original Nanaimo waterfront, which has been filled in. In times of climate uncertainty and unpredictable waters, false waterfronts are considered more vulnerable than original lands. The notion of “false land” is also a metaphor for the construction of the Province on unstable foundations.

Marianne Nicolson (‘Tayagila’ogwa) is an artist of Scottish and Dzawada̱’enux̱w First Nations descent. The Dzwada̱’enux̱w People are a member tribe of the Kwakwa̱ka̱’wakw Nations of the Pacific Northwest Coast. Nicolson’s work engages with issues of Indigenous histories and politics arising from a passionate involvement in cultural revitalization and sustainability.

Nanaimo Art Gallery is situated in the traditional, ancestral, and unceded territory of Snuneymuxw First Nations, and we are grateful to operate on Snuneymuxw territory.

Nanaimo Art Gallery is situated in the traditional, ancestral, and unceded territory of Snuneymuxw First Nations, and we are grateful to operate on Snuneymuxw territory.